Weak crude oil prices driven by the coronavirus outbreak seem to have positively affected demand for crude oil in India. Data by IHS Markit Commodities at Sea suggest that India's seaborne imports of crude oil surpassed 5 million b/d last week, for the first time since mid-August. This has been the maximum achieved in the last seven months. With oil prices pushed down, due to concern around China's appetite for crude oil slowing down sharply due to the virus, supply doesn't seem ready to adjust immediately, with several fresh cargoes to be absorbed in the spot market. OPEC members seem to be considering additional cuts, but with no decision taken yet. As long as supply surpasses demand, India's oil companies could only benefit. 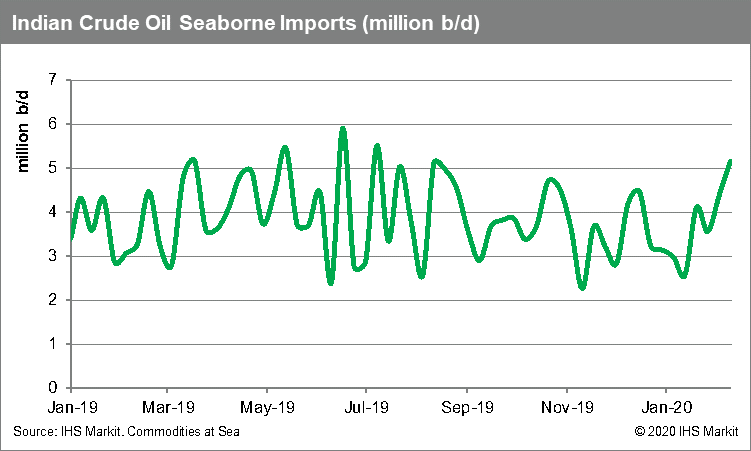 With little potential now left in China's market, at least for the coming weeks, all eyes now switch to India, with oil suppliers trying to negotiate open cargoes with companies such as Indian Oil Corporation, Bharat Petroleum Corporation Limited, Hindustan Petroleum Corporation Limited and Reliance Industries Ltd and Essar Oil. India's demand for crude oil is much more linked to volatility of oil prices, with the country quickly increasing imports whenever global oil prices are under pressure.

Some of the Indian refineries might face inventory losses in the short-term, as a result of the recent drop in oil prices by up to 20 per cent drop month-on-month. But the longer the crisis lasts, the bigger the benefit for the country's economy as local refiners will manage to cut down on production costs.

Meanwhile, India is now understood to be in talks with Russia to re-negotiate long-term imports of crude oil. This agreement could support the two countries to more than double annual bilateral trade to USD 25 billion, from current USD 11 billion. The two countries recently signed a contract for supply of two million tonnes of oil to India from Russia by end of the current year, with plans to sign a long-term contract for supply of oil to India.