US domestic consumption has contradicted the most negative sales forecasts between February and April. Meanwhile, the strong US almond, walnut and pistachio crop estimates combined with the strong productions of its main competitors may lead to low prices.

Most of the big US players reported that prices were falling between 10-20 US cents compared with last November. Standards were most recently trading near USD2.85/lb, while sized Californias were adding only a few cents to these levels. Nonpareil in-shell saw good demand from Indian buyers coming off the New Year holiday at USD2.20 per lb. Strong demand for manufacturing is supporting blanched sliced and slivered at USD3.70 per lb.

The Covid-19 pandemic led to uncertainty. China started its lockdown on January 23, spreading concerns about the pandemic to other key importers in the Far East and the Middle East, such as South Korea, Saudi Arabi or the UAE. Lockdowns in the EU and India in March worried US suppliers. However, the US domestic sales tempered the most pessimistic forecasts, as large processors such as John Sanfilippo & Sons reported in its Q1 financial statements.

January and February data revealed strong domestic sales and exports to most key importers, especially India. Only China, Vietnam and Hong Kong, suffered deep falls, although less than expected despite the lockdown and zero tariff enjoyed by Australian nuts, the Almond Board of California (ABC) reported.

When the pandemic struck the US between March-April, processors, traders and exporters coped well, with the US ports opened as usual and plants ready to work, following essential health measures (gloves, social distancing, masks, etc.). In addition, the general perception of almonds as a healthy and long-life food pushed up domestic demand in April and May. International sales totalled 157.3 mln lbs from March-April 2020, 22.6% more y-o-y. to 231.9 mln lbs.

As a result, the Californian almond industry is ready for a strong recovery once lockdowns finish and if the negotiations between China and the US continue at a good pace. However, the fight against Covid-19 still has no real end in sight, the negotiations are halted and the USDA launched a record 2020 crop estimate this May: 3.0 billion lbs, 17.6% more y-o-y. In addition, Aeofruse and Descalmendra, the main Spanish almond associations, reported that Spain's almond output may reach another record: 115,633 tonnes, 23% more y-o-y.

As a result, Californian volumes of almonds sold have been growing, although relying on low prices. Olam, in its latest market update this May, quoted steam/PPO pasteurised almonds from USD2.15-2.75/lb for Nonpareil and from USD2.05-2.50/lb for Californian types. Average organic prices range from USD5.25-5.75/lb.

The 2019 walnut crop reached around 630,000 (short) tons, 6.8% less year-on-year, according to the USDA estimate. The Californian industry coped with the fall in Chinese imports due to the trade conflict. It closed the 2018-19 (September-August) season with a 9.1% rise in exports (677.1 mln in-shell basis lbs) due to rising sales to Middle East markets and Pakistan, revealing its powerful and flexible marketing.

The 2019-20 season may be different. A combination of lower crop, Covid-19 and weak Chinese purchases, have led to falls in exports.

When negotiations between the US and China looked to be in full swing last December, the Covid-19 pandemic burst. The Chinese lockdown, combined with initial Chilean offers in Gulfood (February 16-20), reversed these positive hopes, leading to the worst of both worlds: falling volumes and prices.

The Chinese appetite for pistachios enabled the Californian industry to weather the trade war well. The US and Iran are the only real global suppliers. The Middle East country has suffered severe droughts and US sanctions for years, cutting both its yield and profitability.

Data reveals the Chinese weight: it accounted for around 40% of the pistachio sold volumes by the US in the 2018-19 season (September-August).

The scenario changed in the 2019-20 season. The US orchards spent an 'off-year' and the 2019 production may have fallen by 27.6% year-on-year to 352.5 mln lbs. Iran enjoyed a strong crop and is set to take advantage of the Californian gap.

Iranian sources revealed that the 2019 Iranian crop ranged from 185,000-210,000 tonnes, exports quadrupling to around 44,600 tonnes between September-December 2019. Iran's prices firmed last December, led by California and Turkey, a key importer whose crop is focused on the domestic market. The Rotterdam importer Pistachio Investments gave the following prices to IHS Markit: kernels were around EUR16.00 (USD17.83) per kilo ddp; in-shell naturally opened 28-30s were at EUR8.5-8.7/kg ddp, while the bigger sizes, such as 22-24s, for which there was a very limited availability, were around EUR9.2-9.3/kg ddp.

US February shipment sales data revealed a notable increase in domestic consumption, compensating for the fall in exports to China, which was already holding its lockdown. February sales fell by 10% in volume to 54.4 mln lbs, leading year-to-date shipments to 392.5 mln lbs, 14.5% less. Seasonal domestic sales rose by 4.4% to 142.5 mln lbs and exports by 22.5% to 250 mln lbs.

Industry sources reported that Iranian exports continued to be strong. International sales reached 88,000 tonnes from October 2019-April 2020, up from 23,000 tonnes in the previous season, but still far from the 100,000 tonnes in the same period in the 2017-18 season.

Primex reported that the US prices fell by 5-10 US cents per lb. Importers were slowing orders because they had replenished their stocks in previous months and consumption is still very weak due to lockdowns. 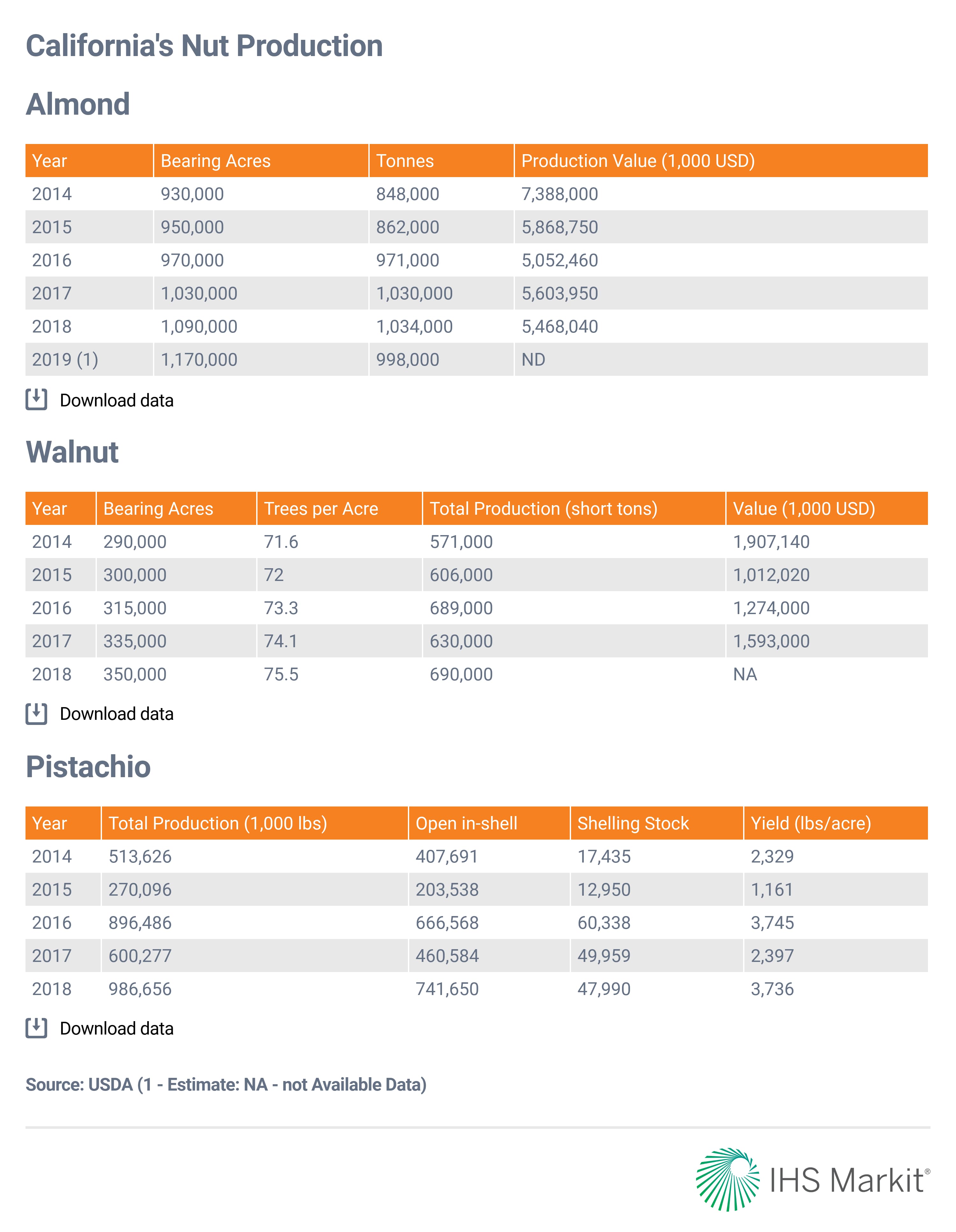