With the intention to reduce crude imports by 10% and increase gas usage within the energy mix to 15% in the next few years, the Indian Government is currently focused on increasing exploration and production (E&P) activities within the country.

Cairn Oil & Gas, the upstream business arm of Vedanta Limited, is the largest private oil and gas (E&P) company in India. It currently contributes around 25% of the country's crude oil production, with a vision to increase this to 50% of India's oil and gas production in the near future.

These 51 OALP blocks cover an area of around 65,000 sq km and have an estimated resource potential of more than 5.5 Bboe. The company has recently announced two hydrocarbon discoveries under its ongoing exploration drilling campaign in its OALP blocks and has committed around USD 800 million in Capex for exploration activities.

Cairn Oil & Gas presently has participating interests in 58 contract blocks in India, including one block under joint venture partnership with Oil and Natural Gas Corporation Limited (ONGC). Under its E&P portfolio, Cairn Oil & Gas is operating 51 OALP blocks and two Discovered Small Fields Policy (DSF) blocks, under Revenue Sharing Contract with the Indian Government. The remaining four blocks are being operated by the company under Production Sharing Contract (PSC). 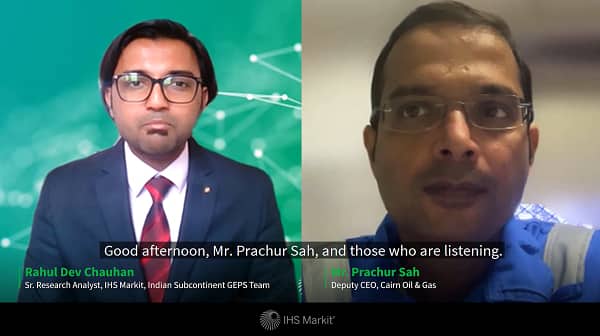 An exclusive follow-up interview is available to IHS Markit GEPS subscribers, where Mr. Prachur Sah elaborates further on the opportunities presented, the Cairn Oil & Gas roadmap, and what the future holds for India's energy mix.