Blog: As US dairy continues to diversify away from fluid milk – what is the long-term market outlook?

US dairy consumption patterns continue to evolve over time as new consumer trends and products alter the landscape. The US dairy industry continues to see overall mostly rising domestic per-capita dairy consumption, but a few big winners have carried most of the gains. Cheese remains the largest growth engine for the US industry, particularly the "other cheese" category, which compromises Italian style cheese such as Mozzarella. US butter demand has shifted higher in the past decade as US consumers have shifted away from margarine. Yogurt has posted strong consumption gains in the past two decades but has started to level off more recently. Whey and full fat ice cream consumption growth in the US has declined in the past two decades. The US dairy industry continues to diversify away from fluid milk, as the proliferation of many other beverages has eaten away at market share in the last 30 years.

Dairy Processors Continue to Diversify Away from Fluid Milk

US per-capita fluid milk consumption continues to decline, despite efforts to revive sales through advertisement campaigns and other industry initiatives to promote new, fluid milk products. Per-capita annual fluid milk consumption in the US has fallen by 35% since 1990 to around 142 pounds of fluid milk estimated in 2019. The increasing competition from other beverages such as sports drinks, juices, flavored waters, sodas, teas, has hurt fluid milk sales in the past 30 years. In addition, lower breakfast cereal consumption more recently, which traditionally promotes fluid milk consumption, has been a problematic factor. 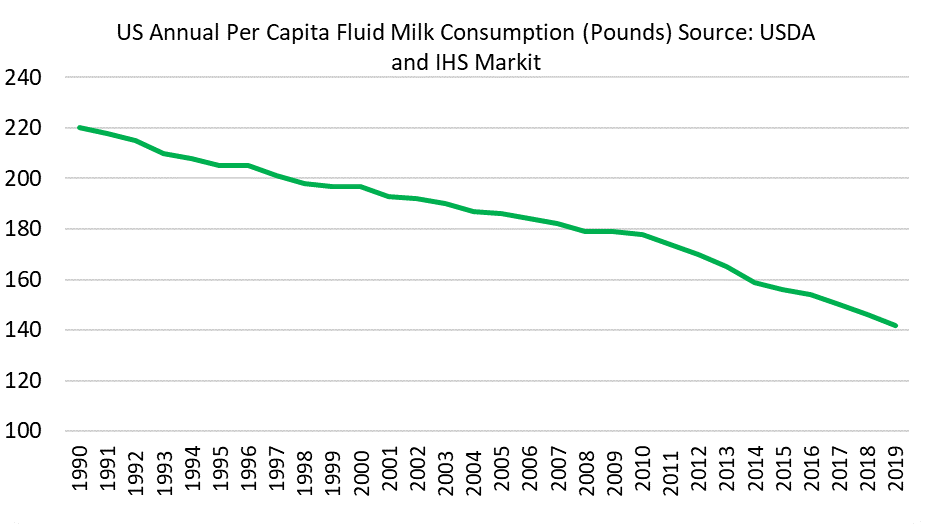 The US dairy industry will continue to view adding cheese production capacity as a safe bet. The next decade likely will favor a continuation of cheese and butter consumption growth trends. Cheese remains the primary engine for further growth, particularly mozzarella and Italian style cheeses. Most new dairy processing capacity in the US that has been built in recent years has been for cheese production. Higher pizza consumption and growing overall cheese usage at fast food and sit-down restaurants has pushed US annual per capita total cheese consumption to over 38.5 pounds in 2019, up 57% since 1990.

US pizza and "fast casual" restaurants have done a great job in the past decade at championing mobile ordering options and that has driven strong sales in that sector, which has been a boon for US cheese consumption, particularly mozzarella. Mozzarella has the greatest growth potential compared with "American style" cheeses like cheddar.

Supply chains have shifted to accommodate greater cheese and butter production capacity by creating a price incentive for dairy producers to optimize milk components for higher milk fat content. The average US dairy milk fat production percentage steadily has risen from around 3.66% in 2010 to above 3.89% for 2018. US butterfat and cheese prices have garnered a stronger premium relative to other dairy products such as dry milk powders in the past decade, spurring a response in butterfat component production levels.

It remains an era with too many other beverage choices for milk to gain traction. Also, the proliferation or greater awareness around "lactose intolerance" has hurt fluid milk consumption. In the long-term, higher rates of away-from-home eating are favorable catalysts for cheese and butter consumption growth as consumers tend to eat more dairy products, particularly cheese, when going out to eat. This leads IHS Markit to the outlook that US dairy processors and supply chains will continue to invest in cheese processing capacity in the next decade as consumer trends remain favorable for steady growth.

The US dairy industry seems to be focusing efforts on other research and development in other dairy product categories after several failed attempts to revive sales of fluid milk. "Greek style" yogurt has been a big winner and a focus on working with restaurants to incorporate more cheese into menu items has been successful. This has helped cheese consumption to steadily rise and that more than offset losses for fluid milk consumption.

Several high-profile fluid milk company bankruptcies in the past few years highlight the need for diversification towards other dairy products. Fluid milk supply chains have shifted, with retailers becoming more integrated in the process. Several large retailers in the US have decided to create their own milk bottling plants in order to save costs and use them as a tool in some cases as loss leader to drive traffic into the store. Retailers have created marketing agreements directly with dairy producers instead of going through third-party bottlers, pocketing some of the cost difference as they integrate supply. Most milk cooperatives and processors see the long-term downtrend in consumption and shifting supply chain at the retail level as major financial headwinds.