In a letter addressed to the European Commission, the EU farming associations have requested the introduction of temporary exceptional measures to support the potato sector hit by the pandemic.

The farming organisation asked for a financial support from outside the CAP budget coupled with temporary exceptional support measures for the potato sector, including:

In addition, potatoes should be included in the scope of the Fund for European Aid to the Most Deprived (FEAD) and promoted in schools' feeding schemes across Europe.

How the European potato industry is affected by the Covid-19

In north-west Europe, where potato production is concentrated, about 15 mln tonnes out of a total of 29 mln tonnes harvested yearly goes for processing. There is an estimated surplus of 2.0-3.0 mln tonnes of potato available for alternative use as feed for livestock, as starch or to generate energy. Starch outlets have stopped operating and they have no intention of resuming their activity in the near future. The resulting potato surplus will have to be destroyed or used as fertiliser with an estimated loss of EUR400 million (USD437 mln), a figure which does not include all losses in added value generated by trade, processing, foodservice and other channels. The forced closure of restaurants and fast-foods worldwide has caused frozen French fries sales to come almost completely to a halt. Many European processors have already shut their lines or are processing at a reduced pace. Consequently, it is difficult for farmers to fulfil their contractual delivery obligations under the current circumstances, and there are no buyers for non-contracted potatoes.

"Potato growers must postpone the deliveries for processing and continue to bear the costs so as to guarantee good storage conditions in order to preserve the quality of the ware potatoes despite the fact that the loss of quality and weight will depend on the upcoming weather conditions," the Copa-Cogeca explains in its letter.

The increased demand for fresh potato cannot offset the losses caused by the reduced sold volumes of processed product. Since the start of the pandemic, the market value of potatoes has dropped from EUR180/tonne to next to nothing as there are no exchanges on the spot market. Harvesting of early potatoes will begin in the coming weeks. Early potato growers are concerned that the market for early potatoes may not be in balance due to the carry-over of additional volume of ware potatoes on the fresh potato market and if containment measures continue to be prolonged. There is a risk of production surpluses and overlapping of potato markets segments.

The two largest processors of frozen potatoes in the world are Belgium and the Netherlands with 2.7 mln tonnes and 1.9 mln tonnes of French fries exported globally in 2019. Industry organisations in both countries have launched campaigns to encourage consumers to eat more fries helping the industry to lower their stocks. The Dutch government has also announced a EUR50 mln programme to compensate growers. 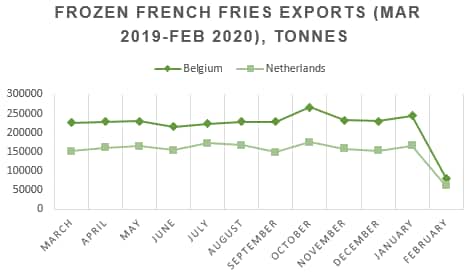