On 4th June 2021, India's Ministry of Power released a discussion paper for redesigning the renewable energy certificates (REC) mechanism. REC mechanism which was first introduced in 2010 to promote renewable energy sources (RES) in India through this market-based mechanism. The mechanism allows obligated consumers of electricity including distribution companies and open access consumers to meet their policy driven renewable purchase obligations (RPO) through purchase of the green attributes traded through the power exchanges. While over the years, the REC prices have been regulated within a floor and a ceiling price, however, because of the excess supply than demand, the realized REC prices have remained close to the floor price ranging between US$15 to $28/MWh during 2011-20.

Since July 2020, no trading has happened for RECs after the central regulator proposed removal of the floor price and bringing the ceiling price to about $15/MWh. The issue is currently sub-judice as the REC suppliers have contested the proposal. 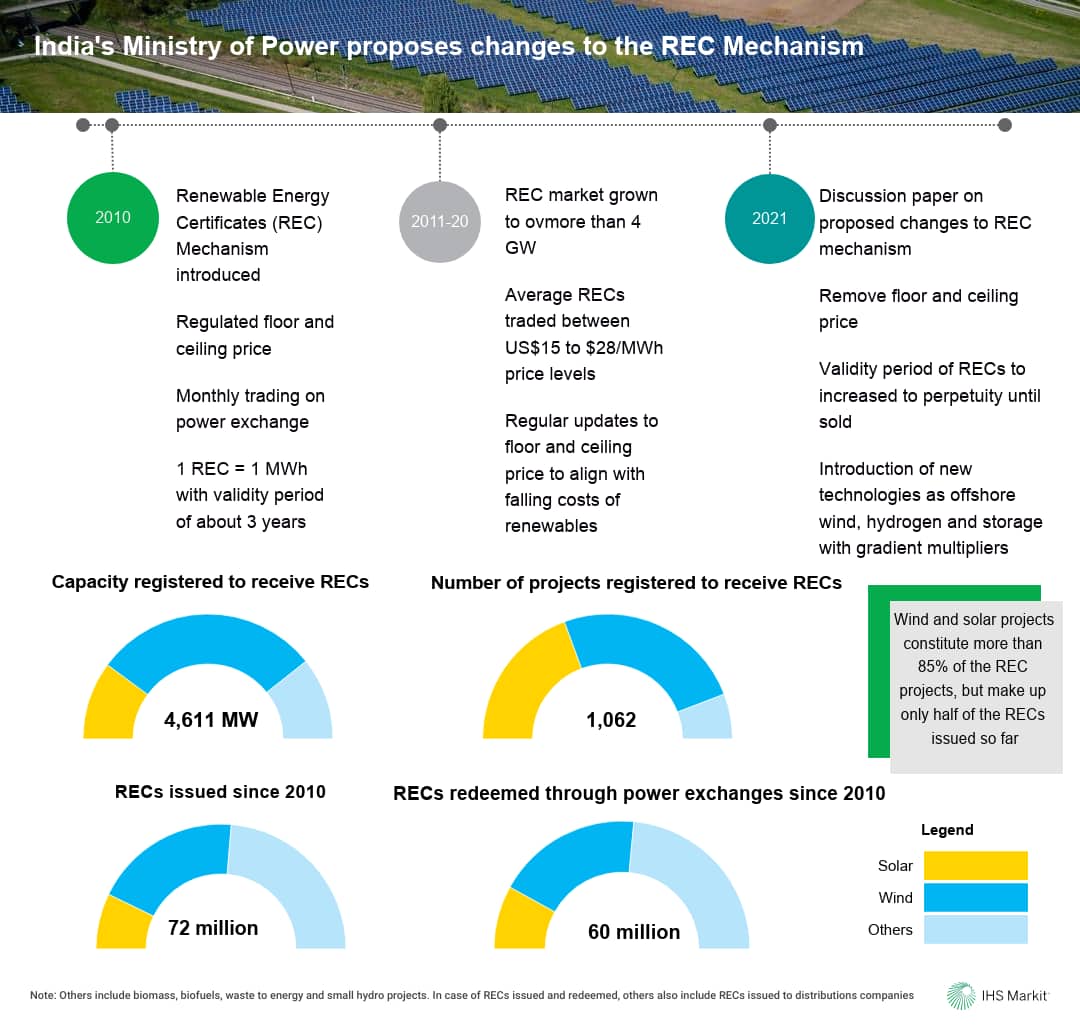 Proposed changes in the REC mechanism in the discussion paper

The discussion paper aims at restructuring the REC mechanism by bringing it up to date. Besides, it proposes the following changes to the current mechanism:

The paper brings up an important discussion around REC mechanism which is an essential market instrument supporting renewables growth in India. The proposal is welcoming and aims to widen the scope of the current framework, however there are certain aspects which need more deliberation and further clarification.

Following are a few comments, suggestions, and questions for the consideration of the ministry of power:

1. Should not do away with the floor price until stricter penalty mechanism for non-compliance of RPO is implemented to create demand:

One of the key challenges with the current REC market has been excess supply with limited demand owing to the concerns regarding the non-compliance of RPO given lack of stricter implementation of penalty mechanism. IHS Markit believes CERC should consider the proposal further.

IHS Markit welcomes the ministry's initiative to include new high-cost technologies within REC mechanism to support them with additional revenue stream till its maturity. However, the following points needs more clarification or procedural information.

3. REC validity should be limited to 3 years while trading frequency to be increased to ensure more activity:

Globally, RECs are valid for 1-2 years - Australia, an REC is valid for 1 year, while in the United Kingdom validity period of the equivalent certificates is for 2 years.

4. Time-period for issuing RECs should be kept same else it may impact the green-field projects:

Currently, RECs are issued for the lifetime of the project i.e. 25 years.

5. What are the plans to bring synergies between different international and local market-based mechanism including I-RECs, Carbon market and ESCerts:

6. RPO for DISCOMs and open access consumers is preferred:

In IHS Markit views it is preferable to allow both the DISCOMs and the open access/ captive consumers to be eligible for issuance of RECs in case of higher than RPO compliance. It will allow to create an ecosystem for development of new technologies by providing an incentive to set up such projects for commercial & industrial consumption.

Learn more about our research in the Asia Pacific energy markets through our Asia Pacific Regional Integrated Service.

Ankita Chauhan is a senior renewable analyst on the Climate and Sustainability team at IHS Markit, covering research and analysis for Indian and South Asian markets.