As 2022 begins, IHS Markit looks at the power markets and highlights the most pertinent issues for the sector in Southeast Asia. These markets are estimated to add 17.4 GW of capacity (6% increase year on year), comprising 7.6 GW of renewables and 9.8 GW of conventional capacity in 2022. Below are the five big questions facing Southeast Asia's power market in 2022 that will need to be watched closely and will be covered in the research agenda for the year:

Will there be a rebound in power demand to pre-pandemic levels in 2022?

Despite the economic recovery in 2021, power demand was still below pre-pandemic levels in Malaysia, Myanmar, and Thailand. Indonesia, Philippines, and Singapore had a strong growth in power demand of between 4.5% and 5%, reversing 2020 declines and rising back to and even above 2019 levels. Vietnam was the outlier in the region, as power demand had continued growing even during the pandemic, albeit at a slower rate of 3% and 4%, respectively, in 2020 and 2021.

In 2022, the economic recovery is expected to continue, and stronger growth is anticipated for most countries, barring any new COVID-19 variant that requires major prolonged lockdowns. This growth will result in GDP recovering and power demand to even surpass pre-COVID-19 levels, and as there has not been any major structural changes to the economy.

How will Southeast Asia's energy transition plan keep evolving in 2022?

The year 2021 was filled with announcements of power plans and policies across the region with a common theme of energy transition for the power sector.

In 2022, Thailand and Vietnam are expected to issue their latest power development plans (PDPs), PDP 2022 and PDP 8, respectively. Both plans are likely to feature an increase in planned renewable capacity, coupled with reductions in fossil fuel generation capacity, in particular coal. Other key themes expected to be featured in 2022 are plans for the early retirement of existing coal-fired generators, following the COP26 pledges, longer-term plans for nuclear, and more studies on the prospects for carbon dioxide storage offshore.

What are the prospects for renewables in 2022?

The highly supportive renewable feed-in tariffs (FITs) in the region ended in 2021 with the 31 October 2021 eligibility deadline for wind in Vietnam. Such supportive pricing policies have been successful in Southeast Asia to grow renewable capacity, but the end of such support has also led to the drastic slowdown in development of utility-scale projects in most countries unless new award mechanisms are introduced.

Malaysia, Philippines, and Vietnam are expected to be the renewable markets with the most potential in 2022. The first renewable auctions in both Vietnam and Philippines will likely come in 2022 once the policies and details are finalized by the respective governments. Vietnam's FIT scheme has already supported close to 21 GW of solar and wind capacity over the past three years, and the government had announced in 2020 that auctions will take over feed-in-tariffs.

auction program in late 2021. This will form the framework for the first renewable auction (announced for up to 2 GW), which is meant to help distribution companies secure renewable capacity to meet their renewable portfolio standard obligations. Towards the end of 2021, the Malaysian government issued the Malaysia Renewable Energy Roadmap to support Malaysia's renewable target of 31% and 40% of installed capacity from renewables by 2025 and 2035, respectively.

Will there be more cross-border power transactions?

There were several announced plans in 2021 for cross-border power transactions. Electricity Vietnam signed the region's first wind export PPA for a 600 MW wind farm, developed in Laos by Impact Energy Siam, BCPG, and Mitsubishi. Beyond transactions between land-based neighboring countries, there were announcements requiring the transmission of power across multiple countries and via submarine cables. These came in the form of Singapore's trial import of hydropower from Laos, via Thailand and Malaysia, and the country's 4 GW power import plan. Singapore's power import request for proposal has already attracted 20 potential importers, several with proposed power export projects from Indonesia to as far as Australia.

Countries have depended on power imports, owing to the lower prices, supply security, and in some cases, lower development barriers. As cross-border power transactions increasingly span across multiple countries and greater distances, the increasing sum of wheeling charges will negate the cost savings from the lower cost of generation in the exporting country. Despite this, there is still a strong case for such transactions because meeting renewable energy demand across the region is facing challenges, as domestic renewable resource potential may be limited or encounter developmental challenges while neighboring countries may have their own domestic targets.

Will international players continue entering the region, mostly through acquisitions?

In the recent years, many independent power producers (IPPs) in Southeast Asia have been expanding their footprint beyond their home countries. They have mostly expanded within Southeast Asia and, to a lesser extent, outside the region, owing to a better understanding and acceptance of the complex business, political, and regulatory environment and strong growth potential in the region's markets. Based on the IHS Markit Power and Renewables Assets and Projects database, 70-80% of operating, under construction, and planned capacity is owned by domestics and/or regional players.

These expansions abroad have been driven by the lack of development opportunities locally to diversify their portfolio and to grow their renewable capacity share. These goals have led to many of the more established IPPs in Malaysia, Philippines, Singapore, and Thailand venturing abroad, and Vietnam has been the hotspot, owing to the favorable FIT and development opportunities. It remains challenging for international companies from outside the region to develop projects in Southeast Asia on their own, owing to the challenging environment,

both in terms of the political and regulatory environment and strong local incumbents. As a result, in 2021, there were several large company share acquisitions by international players and also smaller project acquisitions into either already-operating projects or shovel-ready projects. This trend is expected to continue in 2022.

The IHS Markit Southeast Asian Power and Renewables team will continue to watch the signpost for the region, and these will be covered in the research agenda for the year. 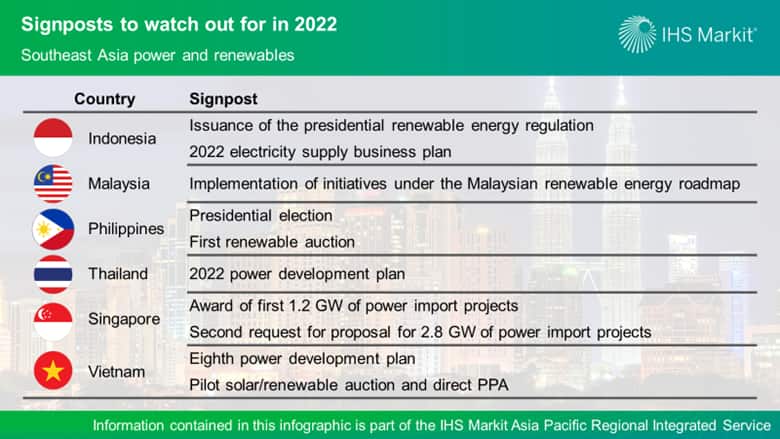 To learn more about our Asia-Pacific energy research, click here.