2022 should benefit from pent-up demand for rigs

While 2020 started out with hopes of being a turnaround year after a lengthy downturn that began in 2014, those hopes were dashed by the fast-spreading coronavirus disease 2019 (COVID-19) and the start of an oil price war between Saudi Arabia and Russia in March. Instead, <span/>the global offshore rig market once again finds itself in a downturn. However, given the short, <span/>slow recovery that was underway before March, the industry has had little time to build itself back up.

We are now in the second half of the year, and much of the world is still at least partly shut down because of the COVID-19 pandemic. The numbers of positive cases and hospitalisations continue to rise in some countries and it is looking like the virus will keep people in many nations at home much, if not all, of this year, further depressing demand for crude oil and natural gas products. <span/>At this point, most of the work that was expected to be awarded for 2020 starts has been pushed into 2021 at the earliest.

<span/>Given the unprecedented uncertainty of this downturn, which combines an oil price crash and a global pandemic, near-term predictions are riddled with caveats as a similar situation has never arisen. However, the Petrodata rigs team traditionally takes its first stab at the two-year-out forecast in July of each year. We will hold to that plan this year and make our predictions for the 2022 global forecast for jackups, semis, and drillships.

Pent-up drillship demand should come to market in 2022 Eighteen drillships are under construction, all of which have scheduled delivery dates by the end of 2022. However, given that only two have firm charters in place at this time, we anticipate some of these delivery dates will be pushed out until market conditions warrant their addition to the global supply. We are expecting weakness in drillship demand this year, most of which is currently pushed into 2021. Because deepwater programmes are typically of longer duration (and greater project cost) than shallow-water programmes, they usually have some downside calculated in the overall project cost, giving them a little more cushion to withstand fluctuations in oil price. Therefore, we expect more delays of upcoming projects than cancellations of in-progress campaigns. As a result demand should trend upwards between now and the end of 2022. In terms of numbers, drillship demand is expected to average 73 units over 2022, compared to 66 units across 2021 and 59 units through 2020.

South America and West Africa account for almost all of our anticipated increase in drillship demand. Our forecast anticipates South America will add 10 rigs from its 2020 average to end 2022 with average demand of 28 drillships. While most of the increase is from Brazil, Petrobras is not the sole operator. International operators such as ExxonMobil, Equinor, Total, and Shell are playing a growing role in the country, particularly in deepwater pre-salt areas.

In addition, in more traditional areas such as the Campos and Santos basins, smaller operators like Premier, Enauta, PetroRio, and Karoon are players. Beyond Brazil, Guyana also needs to be mentioned as an area of growth following ExxonMobil's massive finds, along with Suriname, where Apache and Total have had recent success.

In West Africa, demand should rise steadily over 2021 and 2022 as many of the exploration programmes deferred this year return for the second half of 2021 or early 2022. Longer-term development projects are also expected to kick off around the same time in Nigeria with Total and ExxonMobil, and in Angola, where Chevron, Total, and Eni are expected to resume deepwater drilling. The US Gulf is expected to take a small dip next year, from 17 to 14 units, as some operators wait a bit longer for market conditions to stabilise before awarding new work. Then 2022 will be a year of growth, averaging 18 units due to pent-up demand. Besides the two 20K projects with Chevron and Beacon, a potential third project still under consideration is Total's North Platte project. Of the three primary offshore rig types, the semi market should feel the lightest hit because of the massive drop in demand from the first few years of this decade, which reached a high of 180 units under contract in 2013. This segment as a whole had not begun to recover when the challenges of the COVID-19 pandemic and oil price war were thrown into the mix. The yearly under contract count for 2019 was 67. We expect this to drop this year to 59 before rising a little to 65 in 2021 and taking another slight dip in 2022 to 63 units.

Notably, one region that has grown its demand since the last downturn is the Far East, which averaged about 10 units in 2014 and came in at 12 last year. Over the first half of this year, the region had average demand of 13 semis. This small increase, however, does not make up for the drop in demand that has affected regions such as Northwest Europe, which fell from about 42 units in 2014 to 25 last year, and South America, which declined from 41 in 2014 to approximately 4 in 2019. Likewise, US Gulf demand dropped over the same period from 20 units to 3, and West Africa fell from demand for 16 units to 1.

Despite the large drop in demand for Northwest Europe, the region has the most semi demand globally. Seasonality remains a major factor, particularly in the UK sector. Outstanding work programmes are mostly short term in nature, with few long-term field developments in the pipeline. However, in Norway, temporary changes to the tax structure have incentivised operators to press ahead with some significant field developments. 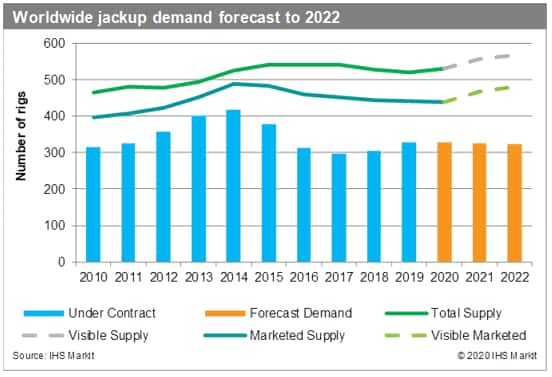 In the jackup segment, our first attempt at forecasting 2022 demand anticipates a slight drop between now and 2022. Early this year, we had been forecasting 2020 to be a year of meaningful recovery for the jackup sector. COVID-19 and the oil price war crushed those expectations, but unlike our forecast for drillships, we currently do not anticipate a near-term jackup recovery and are actually forecasting demand to take a slight dip. However, given that we are still some way off from 2022, more work is likely to filter into the market in many regions.

Not surprisingly, the region we anticipate will have the biggest uptick in demand is the Middle East, growing by about three units from this year to 122. The Central America market is anticipated to have the largest decline, dropping from about 32 units this year to 23 in 2022 as demand in Mexico in particular is not expected to surpass its pre-COVID-19 level in the near term. West Africa should be fairly stable in 2022 with Nigeria the most active country and Angola possibly ramping up as well. Demand in Northwest Europe should average about 22 units.

Asia-Pacific will continue to make a strong showing in terms of jackup demand. In the Indian Ocean, which will have demand for about 32 units in 2022, most of the work will be from ONGC as it works to maintain production targets. Demand in the Far East calls for about 49 units, plus about 35 units from Southeast Asia. While the numbers for these last two regions appear slightly weakened compared to 2020 demand, this is mainly because most operators have yet to plan so far ahead, given current market conditions, plus most cancelled requirements have been, at best, deferred until 2021.

As 2020 progresses and the world (hopefully) gets a better handle on the COVID-19 pandemic and its effects on demand, operators are likely to resume planning certain projects. Our expectation is that 2022 demand will likely be at least somewhat higher than it appears at this point in time given the unprecedented uncertainty from the combined effects of the pandemic and the oil price war.